Map To a Better World 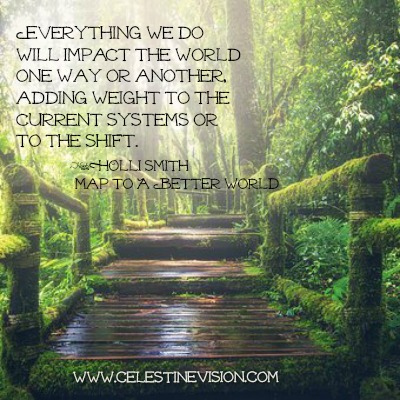 The concept that we are all one, connected to each other by invisible energy, can be a struggle to accept. Not because we don’t want to believe that there is some greater force that we are all a part of, but because it can be hard to understand. At least it was for me and many others I’ve spoken to about it.

It wasn’t until I came across the comparison that each of the individual cells within us are actually one- our bodies- that I could consider this on the larger scale of how the beings on Earth (and perhaps some not on Earth) could be one within and with the Universe. I could visualize how the actions of each of us can have an impact on the whole, how there is a universal force driving us, compelling us to work together for the greater good. And then I could see how problems can arise that can leave us hurting. After all, a problem with one cell can cause problems for every cell and as a result, the entire body.

Once this concept clicked it changed my perception of life, as it was meant to, and the meaning of the Interpersonal Ethic of the Eighth Insight grew deeper. Words like Karma and Dharma started making sense. Karma was no longer something to fear, not an energetic retribution or punishment, but instead the flow of energy we put out coming back to us as we could have expected if only we had known. Dharma was not just the lady married to Greg, but also beautiful spiritual truth.

The reality some live in.

As I drove to work one day, listening to the radio, I heard the story of a woman who had been in prison for 23 of her 37 years. I thought the numbers were a mistake, an error made by the speaker. How could it be possible for someone to be locked up for that many years? That would mean she was a child for part of it. But it was not an error. This woman truly had been locked away for most of her life, first in juvenile detention at 12 years old and then in Canadian Women’s Federal prison at 14.

A child was locked up because she had a traumatic childhood and acted out as a result of being taken away from everyone she had ever known, and put into the foster care system but not given a loving, consistent home. A little girl desperate for love and guidance, was failed. At nearly 19, she was released and dropped off outside of a shopping mall with no resources other than those learned from other inmates. She had no help, no support, despite the fact that she had never gone to high school and clearly had no means to care for herself. I thought for a moment that this story, horrific as it is, was an anomaly. Unfortunately, I was wrong. As the story went on, and as more people were questioned, it was revealed that this is not untypical or uncommon. All of this brought me to tears and made my heart ache.

How do we live in a world where this kind of situation is not only possible, but common?

In a time when so many children are starving and abused, and the rate of suicide among senior citizens is rising because they can’t afford life and they’d rather die than live homeless and hungry, we can no longer live as though it is a “them” problem. This effects everyone, it is a “we” problem. These people are us. They are our past, our present, and our future, and all of us collectively create the kind of world that allows for this to happen. Our history is riddled with strong division – us against them, the good vs the bad. But that lie can only hold up for so long. As the rise in intentional conscious living expands, we are, thankfully, seeing this reality coming into the mainstream.

No contribution is too small.

No one is outside of this, and no one is without the means to help. I recently read about an 8 year old who saved up his money and made supply kits for the homeless people in his community. Another young child got her father to help build tiny homes for homeless in their community. Organizations are making up backpacks with lunches for children who go hungry each day, and others are bringing meals to seniors who can no longer manage.

While many of us may not have the resources to adopt a child or make huge donations, there are actions we can take, kindnesses we can offer, and support we can give that will bring all of us one step closer to a world where everyone is loved and taken care of. The Pachamama Alliance is an amazing organization that beautifully states that “The vision that informs the Pachamama Alliance’s work is of a world that works for everyone: an environmentally sustainable, spiritually fulfilling, socially just human presence on this planet—a New Dream for humanity.”

I believe that there are many people in the world working towards a similar vision, and that the Celestine Insights are a wonderful road map, giving us hope and guidance. Here, we find something to strive for and a solid way to make positive change and participate in the shift towards conscious and intentional living. Everything we do will impact the world one way or another, adding weight to the current systems or to the shift. It’s not about guilt or pity, it’s about deciding what kind of world we want to live in, and keeping that in mind as we move through our lives. Every purchase, every conversation, every choice matters.

To be kept up to date with our latest Celestine initiatives, subscribe to our CV newsletter.