Sustainable Living: The Challenge of Our Generation 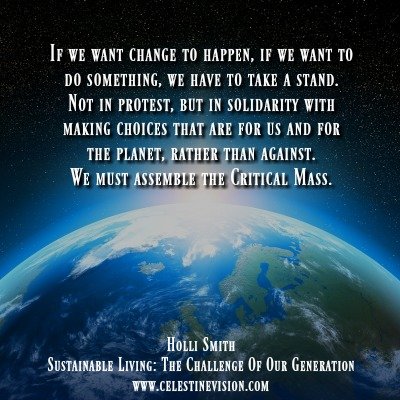 In recent times, the startling amount of microfibres found in the oceans, inside of marine life, has come up repeatedly in my life. I’ve been hearing about it from people I’d least expect it from, seeing content regarding this phenomenon on the internet, and as this information (and more in the same vein) becomes common knowledge, it becomes glaringly clear that we, as a global community, have made some tremendous mistakes in recent history.

The costs of those mistakes are becoming visible in every part of our health, in every part of our environment. While there are many people out there attempting to course correct, and some trying to create ways to clean up the horrifying mess, it leaves most of us struggling with what to do. Many of us have no scientific training, and minimal aptitude for inventions and ideas to revolutionize the world. We want to be the change we envision, we want to have a positive rather than negative impact, and yet we may often feel limited in our abilities to do so.

As much as many of us wish to step out of this culture of consumerism, we often find we cannot.

We have to participate in the world, as it is now. We have to purchase things like shoes and clothes, and household items. In the western world driving is so often a vital part of life – we have to get to work, we have to buy groceries, and it isn’t feasible for everyone to walk everywhere when people are so spread out, often with no resources nearby. We may look to buy electric cars, but often the infrastructure isn’t yet available to support the travel we require, or the cost of electric vehicles is prohibitive in itself.  We can scale back on our consumption, do our best, but to opt out of consumerism completely would be the equivalent of barely surviving for most people.

People in every country around the world are struggling with these issues, some on a much broader scale, and they do so in large part because of choices we as a collective continue to make. How can we, in good conscious, continue this out-dated way of living? Especially as we begin to integrate an Interpersonal Ethic? And yet, a lot of our actions that contribute to the destruction of our natural world we do out of feelings of necessity. We may see that we are trapped within the systems that the people who came before us created, and in some cases, we carry them further, perpetuating the problem.

At this time of transparency and knowledge, we are awakened to the fact that if we continue down this unsustainable path, we will likely ruin the planet for future generations. How many people have already died from diseases created by these issues, poverty, or in wars over the resources that we shouldn’t be using in the first place? How many animals have we lost, entire species gone, because of human greed and negligence?

When is enough enough? What will it take?

Heartbreakingly, if the powers that be haven’t stopped yet, they won’t. This summer, when so much of the world was on fire or under water, it still wasn’t enough. When the latest statistics tell us that one out of every two or three of us will get cancer, because of our lifestyles and environment – for no other reason – it isn’t enough.

But we are enough. This world, this amazingly beautiful, wonder-filled world is enough. If we want change to happen, if we want to do something, we have to take a stand. Not in protest, but in solidarity with making choices that are for us and for the planet, rather than against. We must assemble  the Critical Mass.

Individually, we can do a little to overcome the massive challenges facing us; however, we can each play our part. We can spark movements, be examples, share our knowledge. We can operate and support companies engaged in ethical, fair trade business. We can question everything, and vote for the kind of world we want with every purchase and every choice.

Continued on next page >>>>