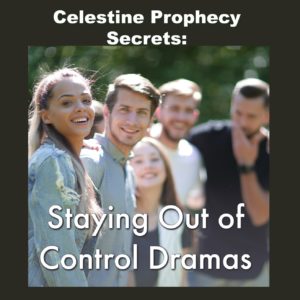 If you have read the Celestine Prophecy, then you know that “Staying out of CONTROL DRAMAS” is essential to becoming more Conscious and being able to create the life you want.

Remember, THE CELESTINE PROPHECY reveals 9 of 12 truths about how the world “really” works and how humanity is destined to come into alignment with this Design.

What is a Control Drama?

Here is an example: You walk into a room and someone says something that is critical, and you immediately react defensively and say something critical in return. The other person responds with another “put down” and so on.

This situation, of course, can result in an argument or worse, depending on the circumstances. At the very least, everyone’s energy level and consciousness comes crashing down.

But, CP discusses another way of reacting. Rather than responding to criticisms by being critical, we can instead give positive, “loving” energy to the other person.

People who are critical do so because they are low in energy (and inner security) and seek ways to dominate others to feel better. BY GIVING ENERGY willingly to them they feel less needly and can actually pop into Consciousness for the first time.

Also, we are advised not just to send energy, but to perform another act at the same time: Tell them in a kind way EXACTLY HOW YOU ARE FEELING—that you are feeling criticized, dominated, or being made to feel guilty in the conversation.

Here we are taking the advice of “INTERACTIONAL SCIENCE” which is a key finding of the Human Potential Movement. We are “NAMING THE GAME.” Naming the game collapses the attempt to dominate and brings the higher truth of what’s going on in the conversation to the front, which makes the conversation move into “authenticity.”

THE KEY HERE IS NOT TO DEFEND YOURSELF, EVER!!

If the person denies what’s going on or makes accusations, don’t argue. Just keep repeating how you feel and giving Energy to them. And, remember that when you image LOVING energy flowing from yourself into the other person, it comes through you first. So, you STAY STRONGER in the interaction.

BUT, even if the person ends the conversation mad or walks away, we have to be ok with that. At least you have used your new “Ability” to remain Authentic and Conscious, and also kept yourself from being dominated and your energy from being lowered. YET, all the while, you have been doing your best to help the other person become more Conscious.

How can we have even more energy and confidence to always respond to “Control Drama Games” in this way? By integrating ALL THE “ABILITIES” of our inner “Spiritual Consciousness” though a “love-based” Meditation Practice.

This METHOD is described completely in the AFTERWARD of the NEW EDITION OF THE CELESTINE PROPHECY and can be transformative.

Three generations are now learning how to live at a greater energy and inspiration level by USING all the “Abilities” of Consciousness, and it is changing the world!!