5 Alternatives To Walking Away From Negative People 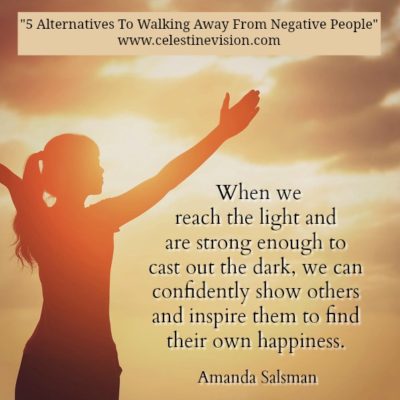 Time and again, I’ve seen articles, posts, and quotes that advise, “If you want to be more positive, remove negative people from your life.” And when I’ve read this advice, I always have an intense internal reaction. I have experienced the pain of loss and abandonment, and every time this message comes around, I think about how devastated others may be if those they cared about walked away from them.

It seems that ‘Throw it away and run fast’ is the advice that’s been given to us for years about how to deal with anything we don’t like. Running from the people in our lives encourages separation with a ‘me versus you’ mentality and keeps us in our own negative thinking patterns about the person. It also leads us towards resistance of facing the issues that come up in our lives. So, in an attempt to live up to my values and beliefs, I decided I need to find a new perspective on this subject and a deeper understanding.

I would like to state before you read on, that I do understand the reasoning behind this way of thinking, and I agree that we must leave the really toxic people and unsafe relationships behind (the ones that are harmful, that use and abuse you, and destroy your sense of worth) – I’ve had to do this myself in the past in order to find the strength to create healthy boundaries. But I wonder what about the people who aren’t intentionally harmful, who are just lost in their way, and who haven’t been shown anything different yet? I once lived like that and despite years of trying to find happiness, it always seemed to elude me.

It’s important to first differentiate between toxic and negative people.

Toxic people consistently act in ways that are harmful to you, leaving you feeling totally depleted and drained of both physical and emotional energy. They make you question the core essence of who you are, how you want to be, and the life you want to lead, which makes you feel insecure, under-valued, and unworthy. Toxic people tend to be problem-makers and try to bring others down, never take responsibility, lie and cheat, and blame everything on others. They are adept at competing with others and will gossip to make themselves feel and look better. Controlling and manipulating the vulnerability of others without any regard to their needs shows how they focus on themselves in an unhealthy, selfish manner.

A toxic person wants others to share in their misery and the impact they have on you can leave you feeling frustrated, helpless, and emotional. But it’s not just about how they make you feel because even many non-toxic people will also drain you simply through having become lost in their own low energy.

Negative people who are lost in their way (but not necessarily toxic), may act in similar ways but their energy feels different and their motivations come from a deep need to find a way out of their issues. I once read, “The toxic person delivers his poison to others, while the [negative] person injects himself with his own poison.” The reason it looks the same is because both toxic and negative people don’t work towards solutions to become healthier – the toxic person doesn’t want to or even try to because they have learned to thrive off the drama they create, while the negative person actually does want to find happiness but they are so lost and blinded by their issues that they feel they can’t do it on their own.

It’s so easy to accuse people of being toxic and even narcissistic as these labels are becoming the trend. But if we take a deeper look into the behavior and motivations of negative people, we may just see they’re stuck in a control drama or they’re disintegrating to lower levels of development – falling into stress and acting on the habitual mechanism of their personality.

While no one enjoys being miserable, sometimes it may seem that others around us are choosing a life of misery. And, while deep down we all want something more – something better – some just haven’t figured out what ‘more’ is yet, or how to manifest positive change. We have created a world where we’re so consumed with our preoccupation that we are easily blinded to what it is that we’re really searching for. The vast majority of us have been down that dark road, so why, when we reach the light, should we condemn those who are struggling to catch up?

Continued on next page >>>