Move Beyond Your Ego And Into Authenticity 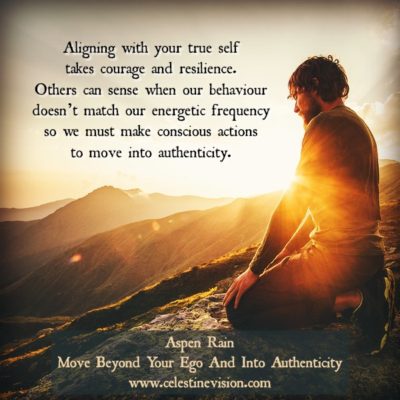 The Ego and it’s conditioned behavioral patterns often stand in the way of aligning with our true Self and living our life’s true purpose. The Ego is a construct of your physical life and experiences. The Ego learns to accept or reject aspects of Self, based on life experiences and social feedback. The Ego acts as a filter, determining what is and what is not acceptable for expression. During our childhood, the Ego is developed from the feedback we receive from our caregivers and peers, for example, if we hit someone, our caregivers and peers will give us negative social feedback that will discourage us from hitting in the future.

At some point in our lives, we find ourselves doing things in order to be socially accepted by others, even if these things aren’t in alignment with our higher Self. This often occurs when we behave in a manner that is not in alignment with our highest Self, but we receive positive social feedback (or at least no negative social feedback) that encourages us to continue with the behavior. When this occurs, we will often have a conflict between what we want and what we need, or between who we want to be versus who we are.

When I was a teenager, I was so worried about fitting in that I learned to dissect every move I made in order to detect and eliminate any sort of ‘uncool’ factors before I would act. This often resulted in me missing out on conversation, because my analysis prevented me from speaking in time with the conversation. I also missed out on opportunities because I was too worried about being ‘cool’. Before I had become conscious about what was happening, I ended up with social anxiety issues. For me, this was a learned behavioral pattern that started in childhood.

During my vision quest, I had a vision that helped me to move beyond my conditioning and into my true Self. As a child, I was in love with performing, but I developed stage fear after my parents laughed at my very first performances – my parents actions had taught me that expressing my highest Self would result in people laughing at me. I would spend my teenaged years trying to fit in but keeping my guitar hidden in the back of my closet. In my vision, I was transformed back into my 13 year old self and I was shown what would have happened had I not internalized my parent’s behavior.

As it turns out, being a musician would have given me a better sense of identity, more self confidence, and a sense of purpose. All of these things would have better equipped me for the difficult years of adolescence. My vision showed me how my Ego and my fear of social rejection had actually hindered my life by causing me to hide my true Self. People are energetically connected to each other and they could detect that I was hiding ‘something’ from them, therefore they could not feel at ease in my presence. My fear of social rejection had actually manifested social rejection in my physical reality. Shortly after my vision, I understood the importance of approaching life confidently and staying open to opportunities.

Usually when our behavior is in alignment with our highest Self, people tend to accept us easier because they can sense our authenticity. When our behavior doesn’t match our energetic frequency, many people sense this as well. Recognizing when your Ego is not in alignment with your true Self is often one of the first steps to becoming self aware. Always questioning our actions will help us identify the conditioned behavior patterns that we play out merely because we were taught to. Once identified, we can replace the conditioned behavior pattern with conscious responses.

Conditioned behaviors tend to be associated with thoughts that seem to play over and over in your head. If you have a new idea that you’re excited about and your mind starts to immediately think things like “that would never work”, “it’s too hard,” or “you could never do something like that” – you might want to consider that this thinking is conditioned and not actually representative of reality. This kind of thinking is very common and it can serve a good purpose in our lives, but we must make sure that this behavior doesn’t become limiting, because trying and failing is better than doing nothing.

Once you’ve identified your conditioned behaviors, you can work to replace them with behaviors that align with your true self. Staying with the previous example, you could consciously remind yourself to replace your old narrative with things like “I can make this work” or “it’s hard but worth it.” Conditioned behaviors often prevent us from aligning with our highest Self and living our life’s purpose.