Empower Your Children With Energy And Freedom 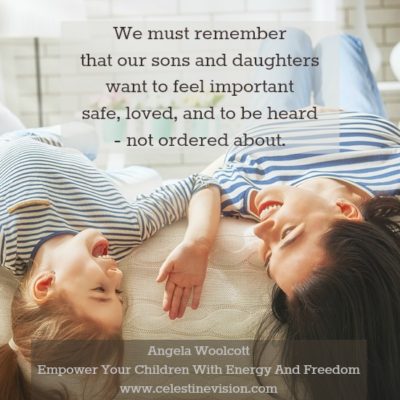 During the year 2000, I was working as a secretary in a busy doctor’s clinic when I was given a copy of The Celestine Prophecy. Blown away by its content, I soon realized the profound effect my energy could have on other people and quickly became aware of how other people’s energy affected me.

As you can imagine, working in a medical centre, you don’t always see the best side of people in this job. When tempers ran high from long waits, I would often receive the brunt of their frustration – this negative energy affected me physically and emotionally, and I would often feel drained and depressed when I went home.

When I read James Redfield’s books, I learnt that I could negate negative energy and fill myself up with positive energy from nature and meditation. I learnt to focus on sending positive energy to those I interacted with and would often be pleasantly surprised with the change in someone’s attitude towards me. Abusive patients would often become calmer and even apologize to me for being rude or praise me for how hard I worked.

“We can assist each other in giving and receiving messages by projecting energy. When we uplift each other we avoid the competition of energy talked about in the Fourth Insight.” – Eighth Insight

As my positive energy was reciprocated when I sent it to those that seemed stressed and unwell, I began doing this in the supermarket, bank, and anywhere that I went. Even if I couldn’t see immediate results, I knew that I was helping. I felt stronger, calmer, and more in control of my life – and actually started to feel that my role in that clinic was transcending beyond booking appointments to helping people in an energetic way.

Relating the Eighth Insight to Children

One experience that I remember clearly whilst working in that surgery, was observing the exchanges between a mother and her daughter I came to know. When I asked this mother to take a seat, she would turn to her four-year-old daughter and say, “Where would you like to sit?” and I often felt surprised by how she would involve her daughter in making decisions. The doctor also told me she found it interesting how this particular patient discussed everything with her daughter as if she was an adult; when the girl needed to be weighed, this mother said it was her daughter’s choice as to whether she would like to stand on the scales or not. Everything was discussed with the child; the mother didn’t make decisions for her as if her daughter was incapable.

Remembering the characters from the Eighth Insight, Karla and her daughter, Mareta, we should keep in mind that it is possible to involve children in making decisions that affect them, and it empowers them if we guide them in their choices by giving them attention, love, and support.