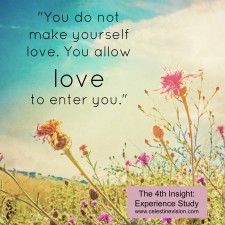 In The Celestine Prophecy, the Fourth Insight is called, “The Struggle for Power.” It builds on the previous insight, “A Matter of Energy,” which shows our world as a field of spiritual energy, adaptable to our thoughts, feelings, and behaviors all centered around of GIVING.

We integrate the Fourth INSIGHT when we see the human world as a vast competition for energy and thus for power. The Fourth Insight points out that for a long time, humans have been unconsciously competing for the only part of the energy we have been open to; that part that flows between people. Conflict occurs when humans feel the need to control and dominate one another.

It can be seen that there is a distinct reason for this, lurking beneath the surface. Interactive Psychology has been looking into the matter for decades with only moderate success. I contend that another field of inquiry, CONSCIOUSNESS STUDIES, is beginning to explain what is truly going on.  Arguments between people in relationships are, in fact, about who will hold the “power.”

When we use a “Control Drama” to hold power over another, we absorb their energy, leading to a sense of gratification and motivation to continue the practice. We thus become ‘addicted’ to the sensation and we will get progressively more demanding and out of control in our efforts to absorb even more energy from our interactions with others.

The 4th Insight announced that eventually, humans would find wholeness in a spiritual universe made of magnetic energy, an energy that can sustain us and respond to our expectations.  Yet, we would also see that because we have been disconnected from the larger source of this energy, we are left feeling weak, insecure and in need.

In the face of this shortage, we have always sought to increase our personal energy in the only manner we have fully understood: by seeking to psychologically steal it from one another. We seek to find some way to control and thus to remain on top in the encounter.  All we know is that we feel weak, insecure and lost and when we control others we feel better. What we don’t realize is that this sense of feeling better hurts the other person. It is their energy that we have stolen. Though this struggle is largely unconscious, it underlies all of the human conflicts in the world.  Most people go through their lives in a constant hunt for someone else’s energy.

Spiritual consciousness is the key to ending human conflict in the world because, during each encounter, we are receiving energy from another source–a source we will eventually learn to pull from unconsciously.

Once humans understand their struggle, the insight continued, we would immediately begin to transcend this conflict. We would begin to break free from the competition over mere human energy…because we would finally be able to receive our energy from another source.

As you emerge into the Fourth Insight from the Third, you are becoming fully aware of the Universe’s ruling principle: GIVING and see it returning in your life.  Now practice giving your energy instead of taking it and see how you feel.

Example:
When someone has asked you a question about how to handle a problem, did you ever feel as though the answer arrived inside you spontaneously or intuitively? And when you are fully aware and GIVE your answer did you afterward feel more intuitive about your subsequent life decisions?