The Aloof Control Drama is less passive, yet still tries to entice you into connecting by acting distant and unreadable. They want you to be involved with them, but they only partially attach themselves and will withhold information from you.

Acting this way sends you in the pursuit of finding more information about who they are and what they are doing. When you do investigate and strive for more of a connection, they respond with vague facts, released with a certain air of mystification. This, in turn, leads you to make even more inquiries. Sometimes, they will also imply that they know secrets that no one else knows, and even convey that these secrets reveal something that the pursuing person desperately needs to know.

Their effort here is to get your attention entirely on them and allow them to control the relationship. This tactic results in giving the Aloof the uplifting energy of your connection and leaving you feeling lessened.

More aggressive, is the Interrogator Control Drama. You know when you run into this style of manipulation because you suddenly feel belittled and begin to monitor your actions so that you feel less vulnerable. Usually, the person playing such a game has learned to put someone down (sometimes under the guise of being helpful) to seize control of the relationship. Subtle criticizing forces the other person to lose confidence and begin to look at themselves through the eyes of the Interrogator. Ultimately, this gives them the power and energy.

Manipulative comments by the Interrogator could be about personal appearance: “Don’t you feel a bit under-dressed for this occasion.” Or a behavior: “I can’t believe you said that.” Or your intelligence: “You really aren’t smart enough to compete for that job.” It could be any criticism. For the Interrogator, it is about throwing the other person off balance so they will defer the leadership of the relationship onto them.

The Intimidator is the most aggressive type of Control Drama where the user tries to scare you into submitting to their control in the relationship. This behavior is the most dangerous of manipulation devices since some Intimidators resort to violence to ensure that the game works, and they are the ones holding the power. You know you are relating to an Intimidator when you sense an air of aggression in their demeanor and attitude. This person usually grew up in an environment, wherein his early childhood, he could not gain energy by being any other way.

The object for all of us is to move our relationships from power struggles to authentically relating. The most significant factor of all is how connected we are with the Divine Mind, which is a part of us all. The more energy and well being we download from that source, the less dependent we are on the strength and approval of others. Moreover, when we are genuinely connecting with ourselves, we have more energy to give. In which this allows us to help others transcend Control Dramas and move to a life of authenticity.

After all, it is the only way to resolve irrational conflicts in the world.

To Read More On This Topic, See My Article: “The Formula For A Spiritual Relationship”

My Recommended Reading: The Nature of Power Struggles by Montgomery Stewart 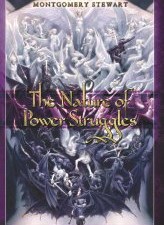