The Day I Drove Through A Rainbow 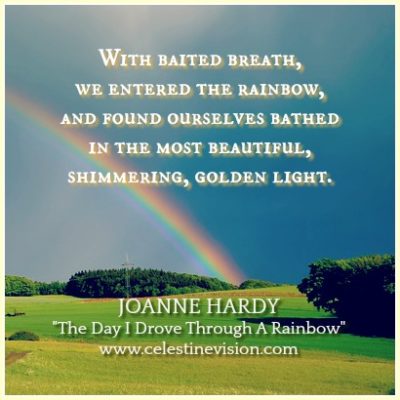 It was 2006, I was twenty-three years old, and one Saturday afternoon my good friend, Jess, and I ventured out in search of some fun. After spending the week working in offices, we’d decided that going camping for the night, somewhere close by, may provide a nice backdrop to our weekend. So, with very little camping experience, I phoned a local site to reserve a pitch and we set off for our night away.

We weren’t travelling far, just enough miles to take us out of the city and into an expanse of greenery, but as the houses turned into fields, we spotted a skyline ahead that would set any fair-weather camper running for the comfort of bricks and mortar. A little taken with our fancy for an evening outdoors, and enamoured with spontaneity, we’d omitted to check the weather forecast before putting our bags and tent in the car. And as we saw thick storm clouds lying over the district we were bound for, we began to wonder if camping that night would likely be far from a pleasurable experience.

With large raindrops starting to splash against my windscreen, whilst the late-afternoon sun still shone gloriously behind us, I set my wipers in motion, and it was then that the most magnificent rainbow appeared ahead of us. Unlike any rainbow either of us had ever seen before, this beautiful spectacle came down from the sky with its abundance of colour and landed straight ahead of us, 200 metres or so away from our car and ended directly on the country road.

The beauty of the rainbow stunned us both, and as I kept driving forward, we looked to each other momentarily in disbelief as we saw the rainbow didn’t move.  “Are you seeing what I’m seeing?” I asked in astonishment. Jess nodded, with nothing more than the word, Yes, escaping her lips. Our eyes wide, I kept my foot on the accelerator, and in what seemed like slow-motion, we drove ever closer to the end of the rainbow, as it still refused to comply with the theory of refraction.

A second later, with baited breath, my little car entered the rainbow, and Jess and I found ourselves bathed in the most beautiful, shimmering, golden light. We found there truly is gold at the end of the rainbow, and the look on Jess’ face in that moment is one I will never forget – just like me, she was filled with awe, appreciating the purity of its beauty. Once inside the rainbow, its multitude of colours were no longer visible, they came together as golden light – and it was the most beautiful display of energy that I’ve ever seen in my life.

Looking back now, I wish I could say that I’d stopped the car, and that we’d both got out to play with the rainbow and danced in its rays, but I was truly too shocked to contemplate anything other than to keep driving at the time. As we drove out the other side, we both immediately looked behind us and saw through the rear window that the rainbow was indeed still there. It didn’t move, and neither of us realised at the time that we should have been taking photos. We were too stunned by the miracle we were experiencing to consider that photographic evidence would have been a sensible thing to get – although saying that, I’m not even sure that my phone had a camera back then, when disposable cameras were all the rage.

Our camping plans scuppered by the torrential rain that ensued, Jess and I drove home, checking behind us constantly, for as far as the eye could see until the rainbow disappeared from view. To honour the night we’d planned, we resorted to putting up my small two-man tent in my living room, and we spent the night sitting in that tent, talking until the early hours, and trying to fathom the experience we’d shared. It blew our minds then, and it still blows our minds now.

What I had confirmed to me that day is that Science doesn’t explain Everything in life. Science offers theories, which are proved to be true via extensive, diligent research – but we must accept that anomalies will occur, which blow theories away, refusing to be pigeonholed by our textbooks.

I’ve yet to meet anyone else that has been inside a rainbow, but the old saying of there being “gold at the end of the rainbow,” makes me feel certain that others have experienced what Jess and I encountered that day. The gold that the rainbow beholds is not kept in buckets of coins and guarded by leprechauns, but rather it’s right there in its light and glorious energy.

Our experiences of the world are ever evolving, and whilst this may not seem like a spiritual experience to some, I know that day I was taught a lesson which told me to question everything – for if we don’t know everything about rainbows, what else don’t we yet fully understand?

Science gives us a firm collection of notions that we believe to be true, but as spiritual beings we can remain open minded to the curiosities of life, and share our weird and wonderful stories to help piece together the true nature of our planetary existence.

So, keep your eyes on rainbows as you encounter them going forward, and don’t expect that they will always move away from you – as some of these grand arches do behave a little differently to the ways our laws of physics currently report. And if you do ever drive through one, please do stop your car and get out if you can!

Whilst Jess and I haven’t chatted for many months, she’s just messaged me asking if I fancy a catch up this evening – I guess her ears were burning, and Synchronicity is asking me to check in with her as I recount this story to you!  I love how our mysterious universe works…

If you’ve encountered science defying experiences, please do join our Facebook group Celestine Prophecy Insight Chatting to share your own stories – we’d love to hear from you!

You can read more from the author Joanne-Louise Hardy by following her on Facebook here.