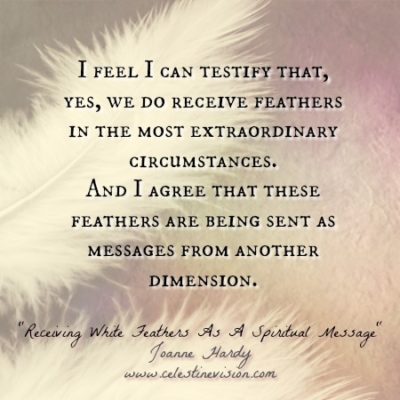 I first heard of people receiving white feathers as spiritual messages twelve years ago, and after years of beautiful experiences (which I’m unable to explain with science), I feel I can testify that, yes, we do receive feathers in the most extraordinary circumstances. And, I agree that these feathers are being sent as messages from another dimension.

Just after my grandma passed away, my mum was asked by a close friend if she’d received any feathers, and this is how I was introduced to the phenomenon. Unfamiliar with the concept, Mum’s friend had described to her how some people find feathers in significant places, which they interpret as a sign that their loved one has safely transcended. As my mum said she hadn’t noticed any to date, a beautiful, small, white feather floated down and landed by her foot. Now, whilst we can all be cynical and say that it came from a bird and the wind blew it to where she sat outside, as a believer in Synchronicity, this story touched me immediately.

After hearing my mum’s tale, my brother then reported to have found three white feathers in his house when he’d returned home from work a couple of days later. There was no explanation he could see for how they’d gotten there and we all took this as a very comforting sign.

Not a week went by before it was then my turn to find feathers, and when I had to go to my grandma’s house to collect an item, I found myself feeling apprehensive about entering the property. I loved my Gran with all my heart and wanted to receive a sign from her no doubt, but for some reason my nerves elevated way beyond my comfort zone at that point. I felt sure I would find feathers inside, and at 23 years old, I went about my business as quickly as I could. My heart racing, I felt scared by the intense emotions that I was processing. I knew that my Gran wouldn’t want to frighten me, but I could feel her energy so strongly… The item collected, I then felt a strange sense of relief, mixed with disappointment that there’d been no feathers, and I left. My heartbeat steadying, I locked the front door behind me, and then turned around to see three white feathers at my feet.

A few days later, I was visiting a close friend and sat in her city centre apartment recounting my experience. With an interest in Spirituality herself, my friend listened with fascination, then as I described the feathers to her, she leant over to pick something up off the carpet. When she looked up, she asked, ‘Like this?’ And seeing a small, fluffy feather in her hand, I agreed, ‘Yes, just like that!’

In the twenty seconds that followed, we went on to pick up another five feathers from the floor in her lounge, scattered around the area where we sat. Gobsmacked, as we kept spotting them, my friend assured me that she’d vacuumed only hours before and didn’t have feather cushions, which I knew to be true. We found six in total and concluded that was three each, which corresponded to the numbers both me and my brother had previously found.

Numerology Insights: The Energies of May