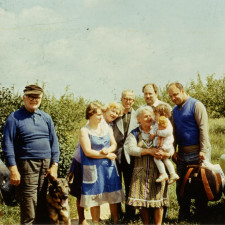 We continue to learn how humans use power and control in relationships to gain security, as humans primarily feel lost and insecure in the world.  Instead of seeking security through the connection with the Divine Mind we call God, we have found it by force.

When we gain insight into our conflicts, we understand and resolve more than our day-to-day personal disagreements. We grasp the long-term secret of how to end conflicts of all kinds.

One of the first things to keep in mind when understanding family relationship problems is that a relationship involves two people. This is two people with their own thoughts, desires, emotions, and opinions. Between any two people, there is always potential for conflict. No one agrees on everything all the time. How people handle these inevitable conflicts will determine the stability of their relationship with each other.

The Key is Communication

Many people hate dealing with conflict. They don’t like possibly upsetting someone else or being upset themselves. They’re scared that expressing their true feelings will hurt the other person’s feelings or alter the relationship forever. These people simply avoid communicating their feelings in a direct way, opting instead to be passive aggressive or to bottle up their feelings, which will result in a blow up later. While eschewing conflict for false peace might be comfortable in the short term, it will have negative consequences in the long term, especially in a familial relationship.

When engaged in an argument, both people usually think they’re right and that the other person is wrong. Obviously, both people can’t be right. Unless the conflict is exceptionally simple, “right” usually falls somewhere in between, and both people need to compromise with each other. Conflicts of beliefs and ideas are almost never solved by one person doing a complete 180 and coming over to the other person’s side. The important thing for family members to realize is that they should love and respect the other person even when they disagree.

The Truth About Your Family Relationships

Family members sometimes feel as if they don’t owe each other the same respect as they would someone to whom they aren’t related, but this couldn’t be further from the truth. Family members should be treated with as much respect as anyone else. People should never operate under the assumption that just because someone is family, they will endure any behavior because “family is forever.” Family relationships will only last throughout the years if they are based on a foundation of mutual love and respect.

Most family relationships are always worth the effort it takes to maintain them. Many people have probably experienced rifts in their families between relatives that have quarreled for years. Most of these relationships could probably be salvaged if the two relatives approached each other openly and honestly with compassion and worked to establish a compromise.