Behind The Screen: Cheryl’s Story – Being Myself 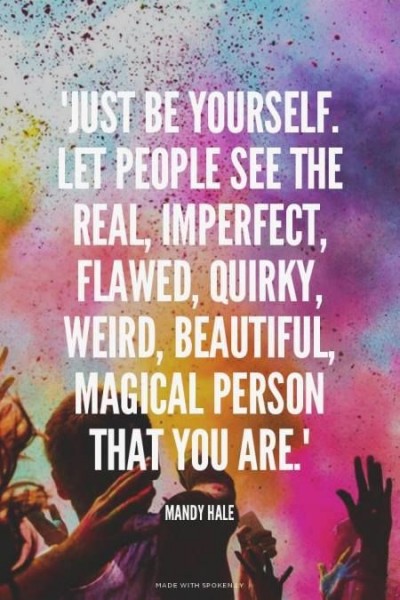 I have never lived a fancy, extravagant lifestyle. Honestly, it’s always been a pretty simple one. My family was not wealthy by means of money, but I have indeed felt rich by the love, heart & untamable spirit they instilled in me. I’ve always known that I was different & possibly a bit strange. But oddly enough, I can’t remember a time where I did not feel love for myself & all the peculiar things that make me unique & unlike any other.

I don’t know how it happened or when, but I do believe I know why. Ever since I was a kid, my mother constantly told me to just be who I am, nothing less & nothing more. So for as long as I can remember, I have done just that. I never wanted to be part of the “in-crowd” or to even be considered as normal. I wanted to be me, & I wanted the world to see me as just that, nothing less & nothing more.

As I got older, I struggled with a constant sense of not belonging or being understood. In a world full of hate & people relentlessly complaining, my little bubble was filled with “hey, it could always be worse.” Most of those in my life enjoyed my optimism & upbeat nature, while others found my perpetual positivity annoying. I began to see the problem & flawed perception of our society, one  that almost everyone I’ve ever known has had. Simply put, they have never felt love for who they are.

Some people never felt they were good enough, some didn’t believe that they deserved good things, while others found numerous things, inside & out, that they hated & wanted to change. Let me just say, it’s not the easiest world to grow up in when everyone around you hates who they are & wants to change every aspect of that, all while you’re on the sidelines wondering why you love yourself & what makes you think you’re so great. Nobody else thinks this way, what made me so different? I am a very curious person, so I’ve spent a large amount of time trying to understand why people feel or think a certain way, especially on this topic. And I’m sorry if you thought you’d find that answer here, because I still don’t know it myself. But as the years have passed, I find myself thinking that I was just lucky. Lucky to be one of the fortunate few, one who grew up loving herself, one who saw the silver lining in every dark cloud.

All I can tell you is that my mom, undeniably, gave her kids the rarest & most priceless gift a mother could ever give to her children: encouragement to be who they are & love every ounce of that, & to never let anything or anyone take that away or change them. Now, I know there have been many times that she questioned my choices or judgement on things, & I’m sure she has even secretly worried about me being so weird (I mean, my favorite movie as a kid was The Rocky Horror Picture Show & I was -& still am- a huge Lord of the Rings nerd). Nevertheless, she has always loved me & allowed me to be who I am. I have not met many people in this life that had that instilled in them the way that I did, & for that, I am truly grateful.

Being a Flamingo in a Flock of Pigeons

As I made my way out into the world of independence & responsibility, my life became a series of trial & error (learning things the hard way seemed to be a set standard for me). Many failed relationships & heart aches, countless moves across the state & one to Kansas then back, I began to think of myself as a roaming nomad. It most certainly brought hardships & unfavorable circumstances, several that I probably could have avoided. But who & where would I be now without all those life lessons?

Since I was 15, I have had various jobs, however I mostly worked in the service industry, waitressing & bartending. I struggled with college, attempting it three separate times, yet I could never stick with it for very long. Even though I was a rather bright student in my younger years & have always been eager to learn, there was just something about how college education was formatted that didn’t seem to work well for me. This led to some disappointment in myself, I couldn’t understand why I struggled with it so much.

It wasn’t until I attended cosmetology school that I felt I had finally found my place & realized just how much each & every person in this world learns & retains information in different ways. So I set down my path to all things hair, going to school 3 days a week, 10+ hours a day, all while working 2 jobs to stay afloat. If you or anyone else has thought cosmetology school is some sort of easy, breezy walk in the park, then let me set the record straight… it’s anything but! It’s more work, blood, sweat & tears than I even have time to explain. But I did it! And even though there were several moments I thought I couldn’t go on, I graduated & started working at my first salon job.