Is the Peruvian Manuscript in the Celestine Series Real? 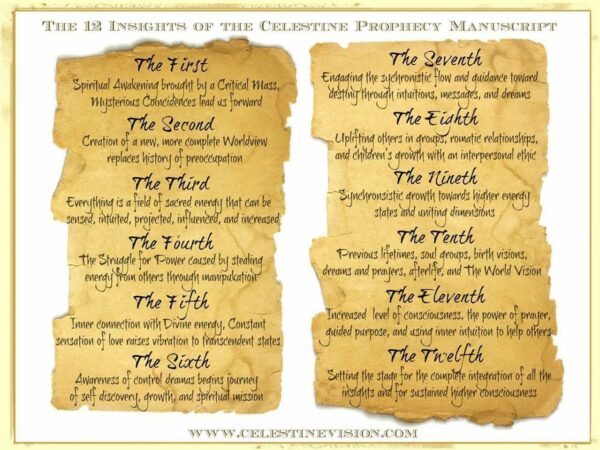 I have been asked many times throughout the years if the Peruvian Manuscript in the Celestine Prophecy is real. The short answer is No; the manuscript is not real. As well, the story is not an accounting of a wondrous journey I experienced myself; but, I would like to explain how the idea of a Manuscript came to be.

From the beginning, my primary motivation for writing the Celestine Prophecy and the other books in the series was to show how we can make changes in our world and stay in an uplifted state ourselves. While it is not easy to do, I believe we are beginning to understand how to accelerate this process via a movement toward a new “level of experience.” We must first grasp this from within ourselves, and then each person spreads it to other people, one by one.

What makes this sharing possible is that spiritual consciousness is truly contagious. We appear to be wired to jump in, just by being around another person who’s acquired and living an enlightened life. In a sense, it’s prevalent because a higher awareness will always replace lower functioning behaviors. And so, the odds remain stacked in our favor.

I wanted to present Spiritual Consciousness as an experience that could be entered through a series of steps or Insights so we could learn to live by example. What’s important to know here is: I didn’t make all of this up. I conceived these insights, not from an actual Manuscript found in Peru, but through studying the Human Potential Movement and analyzing what people were already discovering in the real world. In truth, I was merely reporting on the details of the new mindfulness that has been slowly coming into humanity for decades.

I chose to use an adventure parable approach, where the reader identifies with characters who are seeking greater spiritual experience. This resonated with millions of people as it focused on the mysterious coincidences that were already occurring in each of our lives. While the Manuscript itself is fiction, I’ve often said that the Insights are real. But, don’t take my word for it; you just merely have to prove it to yourselves.

I used a manuscript in the story as the focal point because manuscripts were primarily used to communicate many teachings in ancient times. By splitting up the manuscript into parts for the main character to find, it became an adventure, increasing suspense in the story. Readers became intrigued, wanting more, which essentially made it such a page turner.

The Celestine Vision was written to present the historical and scientific background of the first Ten Insights. In this book, I share examples of my own experiences with Synchronicity, examine one hundred years of discovery in physics and psychology, and show that both miracles and scientific discoveries are part of the same unbroken chain of evolution shifting toward a better world.

If you have found yourself questioning if the Manuscript is real and hungered for more about the ideas expressed in the 10 Insights, The Celestine Vision book further expands our consciousness about the changes coming to fruition at this historical moment.

The truth presented throughout The Celestine Prophecy series is that we are all spiritual beings acting to spiritualize the culture of Planet Earth. All we have to do is hold this Vision and act with courage, and the world will truly transform.

A Look At The Writing Process