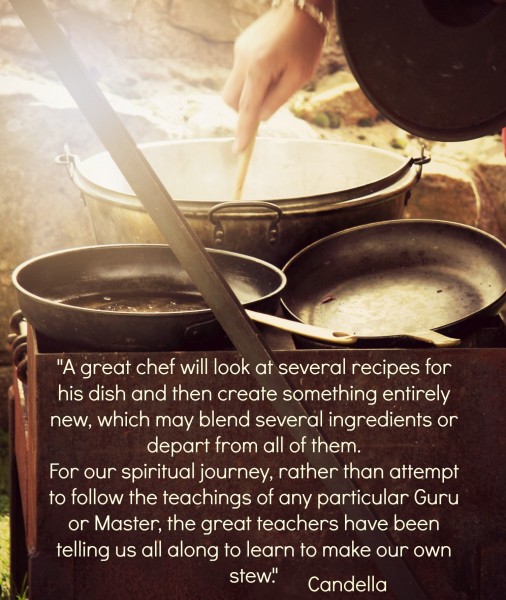 A little about my spiritual journey:

Once upon a time, I went to a little Church of Christ in a little town in Northeastern Arkansas. I didn’t go every week, but I went when my parents took me. My Grandparents helped to found that Church, they were part of the team that Called the preacher (as in decided who would be the preacher of the Church) and they were elders who helped make a number of decisions for the Church. As a child, it was the only Church I really knew. As I got older, I sometimes went to church with friends of mine and discovered very quickly that Baptist churches were different from the Church of Christ. At some point, I even went to a different Church of Christ which was much more liberal than the Church of Christ where I had “grown.” It seemed that different denominations had different flavors, if you will, and even within the same denomination, there were different flavors of how Christianity might be.

My curiosity about religion was born by the time I was 10 or so years old.

I had a significant life event when I was nearly 13 years old, which made me question everything. I questioned everything my parents said, I questioned the validity of “lying” to children about Santa Claus, the Easter Bunny,  and the Tooth Fairy. I learned more of mythology and the Gods and Goddesses of Egyptian, Greek, and Roman stories. I questioned whether the “God” I had been raised to believe in was anything more than another mythology. I was also reading the stories of King Arthur, and in my own mind “God” and “King Arthur” were very similar in that they were both old men who sat on thrones in far off lands, one called “Heaven” the other called “Camelot.” In all honesty, my image of God and my image for King Arthur both looked like Sean Connery, and by the time I turned 13 yrs old, I didn’t believe in either of them as “real.”

Even as I didn’t believe in this Man, who sat on a throne, in the far-off land called Heaven, I continued to search and question so many things. There was a book on people who had experienced “flat-lining” and had, according to medical science, DIED, but then were brought back to life with CPR or via defibrillation (electric shock paddles that restart the heart). Many of those who “came back from death” had some stories to tell of their experiences on the other side, and though I was declaring myself as a “self-proclaimed atheist” by the time I’d hit my teen years, I was still exploring these interesting stories of paranormal, and so many other unexplained mysteries.

And I continued to read, to learn, and to grow. By this time, I was entering college.

I met some people who were not Christian. I met some who identified as Wiccan, some who identified as Druid, some who identified as eclectic Pagan. I learned that there were Goddesses as well as Gods, and there were way too many for one person to know all of them. The Pagans seemed to have their favorites, but when it came right down to it, many of the Pagans I’d met seemed to connect mostly with the essence of the earth, or the universal energy, or something beyond words more often than to be specifically focusing on a particular “person” (aka God or Goddess) to whom their “prayers” were directed. I observed. Sometimes I participated. Sometimes I felt the essence of the energy also, but I  didn’t always identify with the “Face” or the “Name” spoken out loud in the ritual.

I hung out with some Muslims, and they invited me to the Islamic Mosque in the town where I lived. I went to a Jewish Synagogue as well, and a  Catholic Mass. I went to a number of earth-based rituals and, of course, I continued to read, and to learn, and to grow.

And there was Science. I was going to classes at the University, and I also had the beautiful experiences of spending time with scientists who didn’t believe in any of that “mumbo jumbo” stuff of any of the religions. For the scientists I knew, their “higher power” was the scientific method and their peer-reviewed (meaning, extensively picked apart for the essence of the TRUTH) body of scientific literature. I really fell in love with science and its ability to focus in on what was “Real” and “True” and “Observable.”

I became involved in research and doing science as an undergraduate student, and took my research to conferences. On the drive to one of the conferences, I was in a van with a professor (very devout scientist and atheist) and another student whose husband was a pastor and who was a very devout Christian. On this trip, we got into a discussion about the body of literature as the “higher power” and it was such an adventure to be able to understand the scientific exploration of religion. While the other student and the professor weren’t necessarily able to reconcile their different opinions and perspectives, I really loved being able to hear both perspectives juxtaposed upon one another.