Communication in a Creative Setting or Workplace 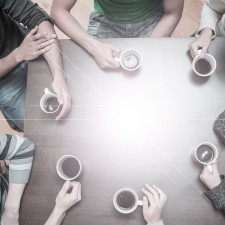 We are all learning to benefit from our Spiritual Connection, which means we can “Solve our Problems and Reach our Dreams” in a near miraculous manner! But to do so, we must cultivate our flow of Synchronicity and Intuition and maximize the  ordinary moments in life. This is especially true in our work and creative life. Creative situations with others can be enhanced by the energy and contributions of the group, or become banal power struggles where nothing gets done. We will address how to enhance our creative communication with others on The CelestineVision Community Radio Show this week, February 16, 2015.

A New Article For Inspiration:

“5 Keys of Dealing with Workplace Conflict” provided by Forbes.com

“From my perspective, the issues surrounding conflict resolution in the workplace can be best summed-up by adhering to the following ethos; ”Don’t fear conflict; embrace it – it’s your job.”  While you can try and avoid conflict (bad idea), you cannot escape conflict. The fact of the matter is a conflict in the workplace is unavoidable. It will find you whether you look for it (good idea – more later) or not. The ability to recognize conflict, understand the nature of conflict, and to be able to bring swift and just resolution to a conflict will serve you well as a leader.

Every workplace is plagued with people who use emotion to create conflict in order to cover-up a lack of substance.These are the leaders that when confronted with wrongdoing and/or lack of performance are quick to point the finger in another direction. They are adept at using emotional tirades which often include crocodile tears, blameshifting, little lies, half-truths, and other trite manipulations to get away with lack of substance. The only thing worse than what I’ve just described is leadership that doesn’t recognize it and/or does nothing about it. Real leaders don’t play favorites, don’t get involved in drama, and they certainly don’t tolerate manipulative, self-serving behavior.

1. Define Acceptable Behavior: Just having a definition of what constitutes acceptable behavior is a positive step in avoiding conflict. Creating a framework for decisioning, using a published delegation of authority statement, encouraging sound business practices in collaboration, team building, leadership development, and talent management will all help avoid conflicts.

2. Hit Conflict Head-on: By seeking out areas of potential conflict and proactively intervening in a just and decisive fashion you will likely prevent certain conflicts from ever arising. If a conflict does flare up, you will likely minimize its severity by dealing with it quickly. Time spent identifying and understanding natural tensions will help to avoid unnecessary conflict.